This auditorium is situated at the far end of a dense school campus. We added a large public room at the entrance to the auditorium which offers a place of pause along the main spine of the campus leading to the refectory and dormitories from the

classrooms. Lighting this volume appropriately at night creates the sense of a beacon/lantern at this location marking a place of public congregation.

The auditorium itself is a fully equipped state-of-the-art facility with acoustic treatment to afford unamplified voice and music performances. Apart from the auditorium the facility also houses

The public room, enclosed within expanded metal screens is a double height volume serving both as the lobby for the auditorium and a place for congregation along the main spine of the school. This addition to the auditorium mass helps scale it down and relates it to the existing scale of the buildings on campus.

The steps in front of the auditorium extend the nature of this place for congregation and respond to the existing basketball courts here.

The public room is a sheltered space with no defined program. The space is used as a place for informal student activities, as a spill out for the auditorium, and as a place of pause. 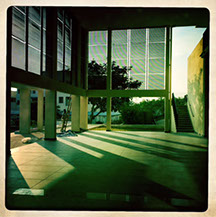 The scale of the auditorium mass (width and height) are broken down as it comes out to meet the spine. These shifts in scale are seen as planes making the transition.

The long facade of the auditorium is indented to receive hoardings of previous and upcoming performances. This niches in the wall optimize the cavity within calibrated for acoustic performance. The floating roof of the verandah can be seen here.

Working with a wonderful acoustical engineer, the interior design completely takes its cues (in terms of finishes and articulation) from the technical requirements for performance.

The wall planes clearly reveal the 4m cadence of the structure of the building with the acoustical treatment in-filled in these bays. The vertical surfaces are made of three different

materials; starting with a perforated acoustical board at the lowest level (with absorptive and reflective qualities), a veneer surface (b) in the middle (reflective) and fabric covered acoustic mat on the top most levels (absorptive).

The ceiling too is articulated based on performance requirements. The faceted clouds focus the sound.

The acoustical design has been done with two simulation processes, i.e., for the room and for the sound system. Using the powerful EASE acoustical modeling software the first output was to determine the areas of first direct sound reflection from the stage performing area and then second, third, forth, etc., and determine how the sound gets reflected toward and altered by the space boundaries before reaching the audience area for unplugged performances.

The second simulation was for the audio sound system to see how the sound will be projected toward the audience and how the room plays its role in effecting the audience experience. Finally both simulations were combined together to find the common denominator which is both suitable for unplugged live performances and enhanced performances with a sound system.

Using broadband acoustical treatment of absorption and diffusion the total sum of random predicted cavity sizes delivers an even acoustical response to the space volume. The final acoustical

result is an excellent tight, even sounding, hall with a RT60 0.5, which is right on target for a venue of this nature.

Using a fixed sound system setup with 6 boxes of line array technology on each side and centrally mounted sub woofers the audience area gets an even coverage pattern of ± 3dB throughout.

The audio system delivers a distortion free power output of 110dB through the frequency range of 25Hz through 16kHz. Finally the system setup is strung together using DSP (Digital Signal Processing) with programmed presets so that the facility has an easy to use iPad interface for different

The public room is seen as a beacon in the evenings when most of the open events will be held. Seen from a distance this glowing box locates the auditorium.

Working with a lighting designer the soffit of the roof slab was lit up to achieve the desired effect. 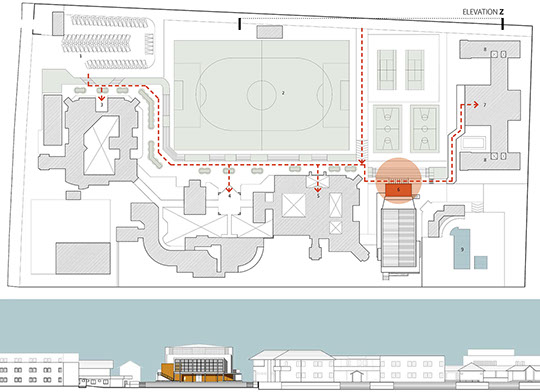 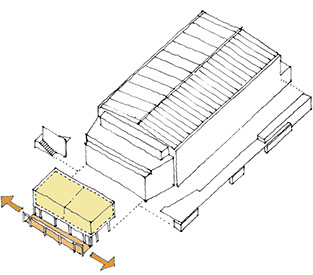 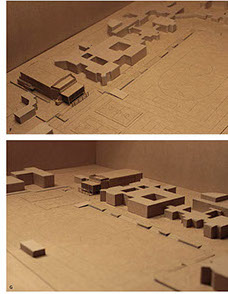 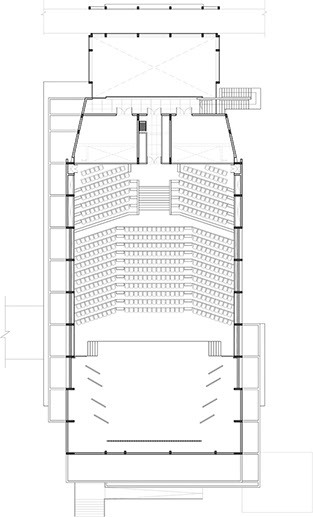 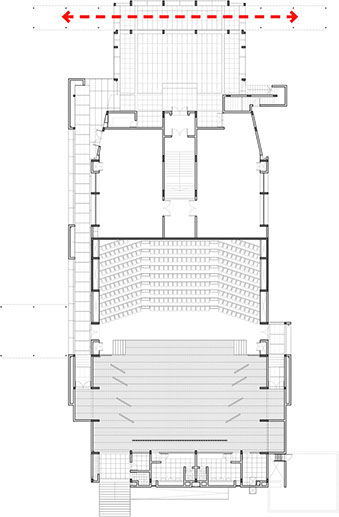 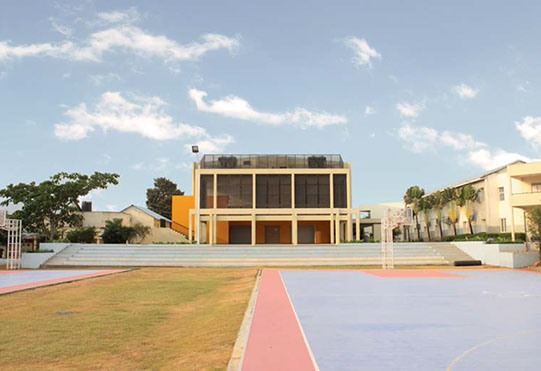 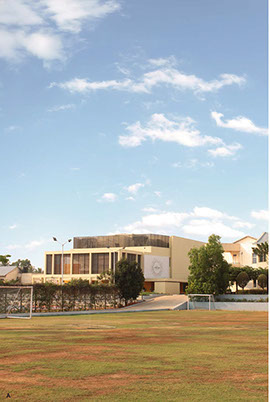 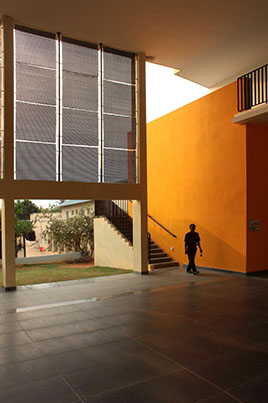 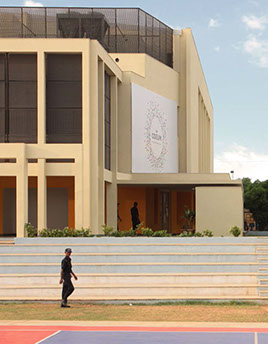 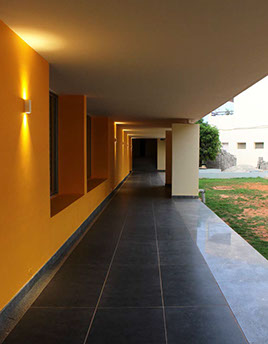 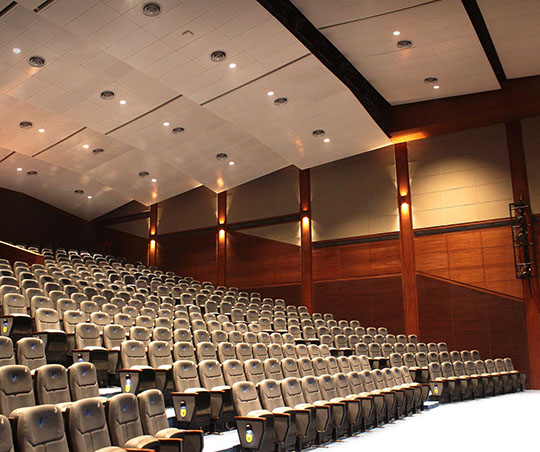 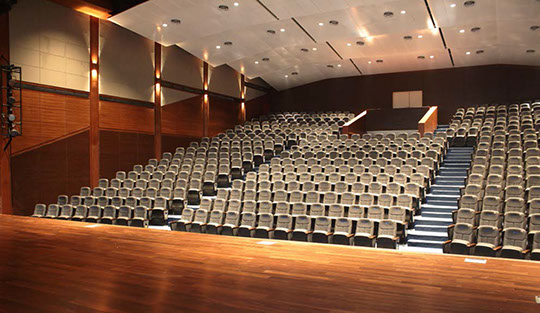 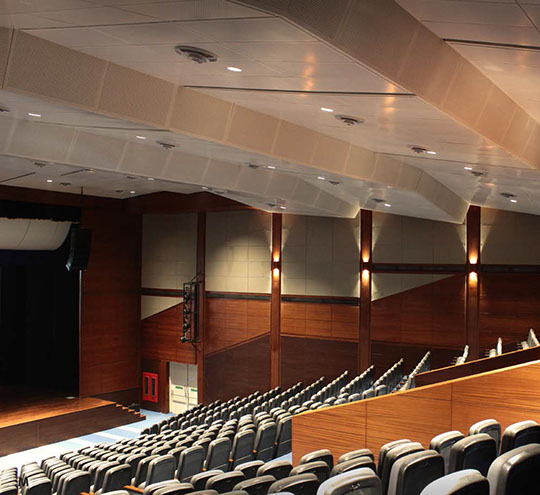 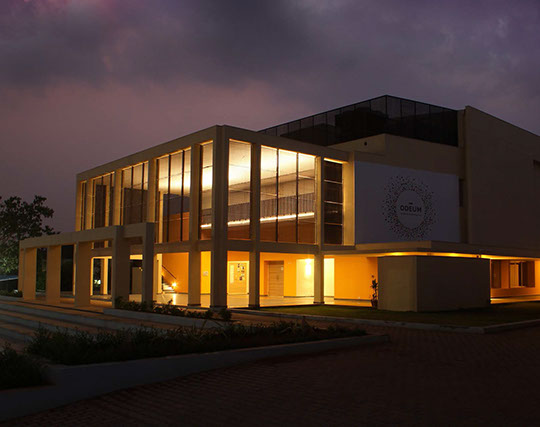